Arkansas Employment and Unemployment – May 2014 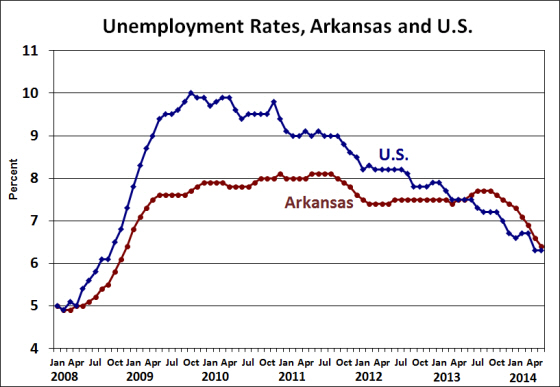 For the second consecutive month, however, the unemployment rate drop was accompanied by a sharp decline in the labor force.  The number of unemployed dropped by 2,637 in May, and was down 7,649 since March.  But we have not been seeing a commensurate increase in the number of  employed Arkansans.  Rather, the number of employed has declined by 7,776 over the past two months.  As a result, the labor force declined by 15,425 during April and May.  The declining labor force is something of a puzzle.  With labor market trends appearing to be on an improving trend, we would expect to see discouraged job-seekers re-enter the labor force, boosting participation rates and unemployment rates.  Instead, we’re seeing the reverse.  It might be the case that some job-seekers are leaving the labor force out of frustration, but it might also be the case that job seekers are leaving the Arkansas labor force in favor of finding jobs elsewhere.  The declining labor force might also reflect a cohort of newly retired baby-boomers dropping out of active labor force participation.  Two months is not long enough to establish a trend, but this development is worthy of monitoring closely over the next few months. 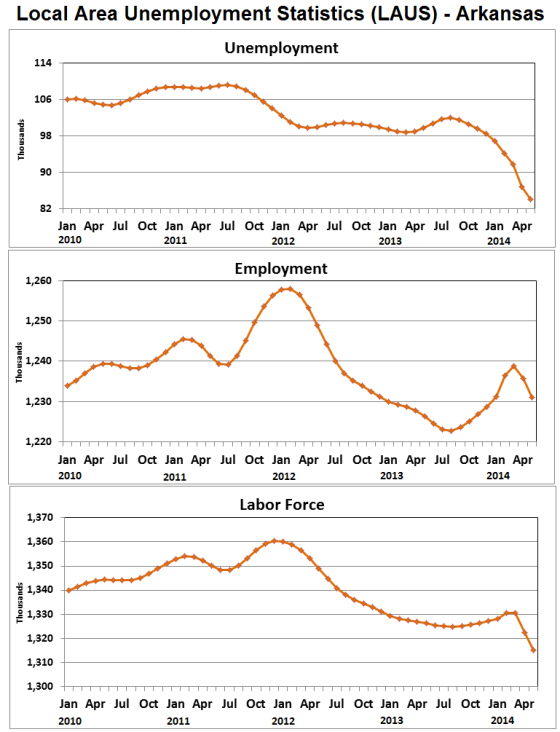 Payroll Employment
The separate survey of employers showed nonfarm payroll employment down by 400 in May (seasonally adjusted).  Sectors losing jobs in May included Construction, Manufacturing, and Retail Trade.  Employment was down in most service sectors as well.  A notable exception was Education and Health services, which increased by 2,500 jobs.  Over a longer span of time, payroll employment is maintaining a respectable growth rate.  Since May 2013, total employment is up by over 14,000 jobs, and we’ve seen the creation of nearly 39,000 jobs since the trough of February 2010.  Nevertheless, Arkansas employment remains more that 18,000 jobs lower than it was before the recession began in December 2007. 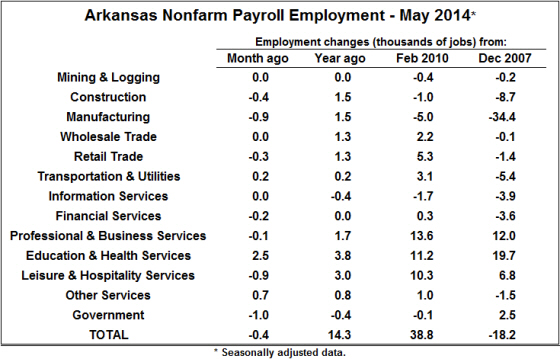 Considering the employment gains of the past 12 months, there are two distinct subperiods.  During the latter part of 2013 we saw significant job growth, with an increase of nearly 15,000 jobs in the period from May 2013 through January 2014.  So far this year, however, job growth has stalled.  From January through May 2014, total payroll employment has declined slightly.  Some of the slowdown is likely associated with harsh winter weather that we experienced in the first part of the calendar year.  More recent weakness in payroll employment growth parallels the reversal of employment gains that we’ve seen in the household survey. 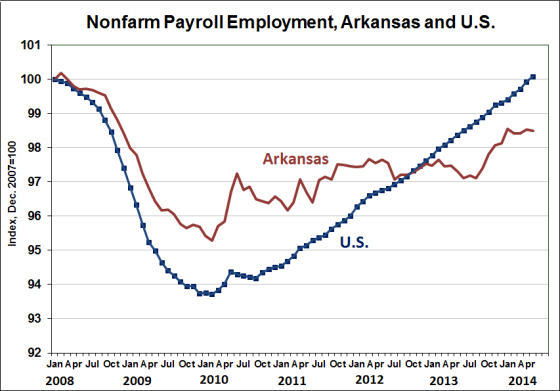