The Arkansas unemployment rate was reported to have declined again in March, this time by two-tenths of a percent to 4.0%.  Over the past three months, the rate has fallen by 0.7%.  More remarkable is the underlying data on household employment that has driven the rate decline.  In March, the number of employed Arkansans was reported to have been up 9,569 — the third month in a row of gains near or above 10,000.  From December through March, household employment has increased by more than 30,000.  This is literally unprecedented, and as reported below, it is at odds with the data reported in the separate payroll employment report. 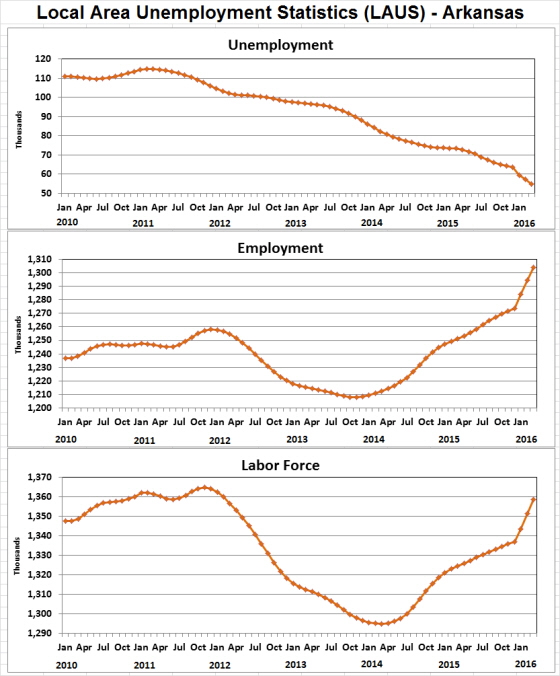 Payroll Employment
Nonfarm payrolls were down in March, dropping by 3,900 (seasonally adjusted).  In addition, the data for the previous month were revised slightly downward.  From December through March, payroll employment has declined by a total of 3,100.  It is not unusual for the household data and payroll data to give conflicting signals.  The two sets of employment measures are constructed using different data sources and methods.  The household report includes workers in the farming sector, the self-employed, and workers with jobs outside of Arkansas, whereas the payroll data do not.  The payroll data also count each job, whereas the household survey treats multiple job-holders as a single worker.  None of these differences is likely to account for the type of discrepancy we’ve seen between the two sets of employment numbers so far in 2016. 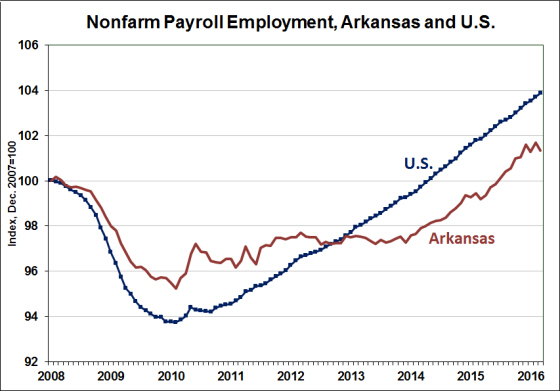 Two more likely explanations exist to explain the differences in the two employment series.  One possibility is that the unusually mild winter has had distorting effects on the seasonal patterns in the data.  If this is the case, underlying trends in employment growth are likely to become more apparent as the year proceeds.  The other possibility is that unusual patterns are affecting the viability of the model-based components of the data estimation process.  If this is the case, the divergence may persist in the currently published data until they have been revised with more complete information.

For now, taking the data at face value, the table below shows the breakdown of payroll employment changes for March.  For the month, job losses were evident in the goods-producing sectors and in each component of Trade, Transportation and Utilities.  Professional & Business Services and Education & Health Services continued the positive growth that has characterized those sectors throughout the current economic expansion. 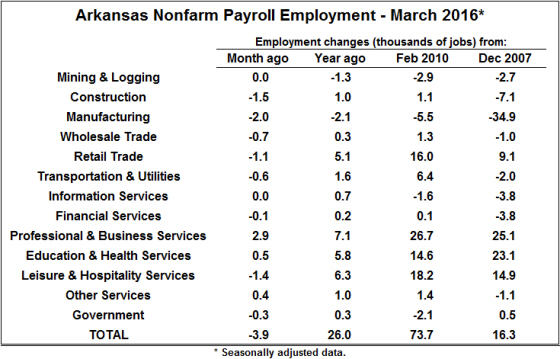