The unemployment rate in Arkansas fell to 7.4% in March – down 2-tenths of a percent from the previous month.   The new data from the U.S. Bureau of Labor Statistics (BLS) and the Arkansas Department of Workforce Services (DWS) showed that the favorable trends that emerged in the household survey late last year are continuing:  The number of unemployed Arkansans fell by 1,900 in March and the number of employed was up by 5,500.  Hence, the unemployment rate declined while the labor force expanded.  March represents the eighth consecutive month in which we’ve seen these trends.  Since July 2011, the number of unemployed is down by approximately 8,000 and the number of employed is up by more than 32,000. 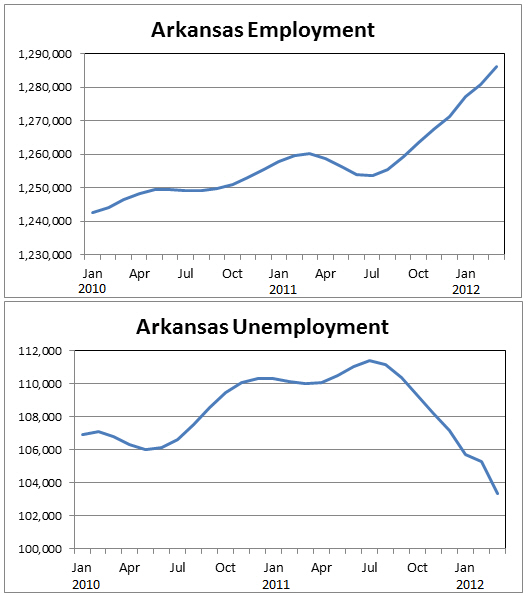 Payroll Employment
The separate payroll survey was not as unambiguously positive.  Seasonally adjusted, total nonfarm payroll employment fell slightly in March — down by 1,900 jobs.  The seasonally adjusted data might be distorted this year by the warm winter and early spring.  Construction employment, for example, was up sharply in January and February, but declined by 2,100 in March.  This pattern might simply reflect an unusually early start to the construction season.

In addition to construction, sectoral declines in the payroll employment data were prominent for Professional & Business Services (-1,700) and Government (-900).  On the other hand, employment in the Leisure & Hospitality sector was up by 2,000 in March, and Education & Health Services saw a gain of 1,000.  Those two super-sectors, along with Mining & Logging and Government, are registering more jobs now than at the start of the recession in December 2007. 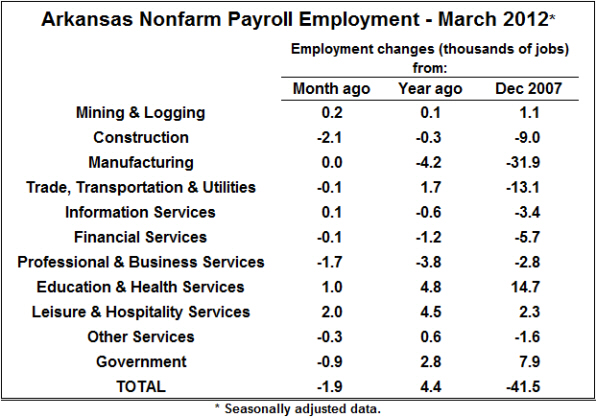