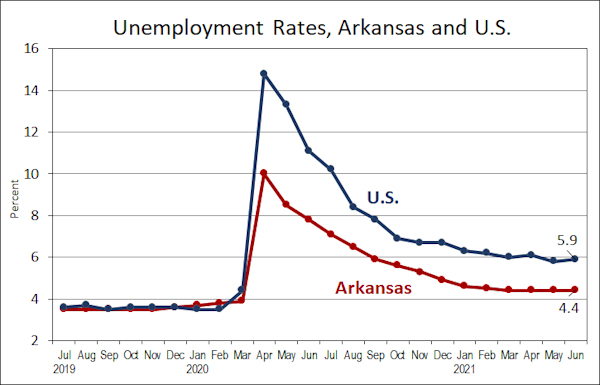 Not only was the unemployment rate unchanged in June, but the underlying components were essentially flat as well.  The number of unemployed was up for the first time since the pandemic struck labor markets in April 2020, but the increase was only 500.  By comparison, the number of unemployed had declined by 7,800 over the first five months of the year.  The household survey showed that the number of employed was down, but only by 750.  As a result, the labor force contracted by 250.  None of these changes are economically or statistically significant. 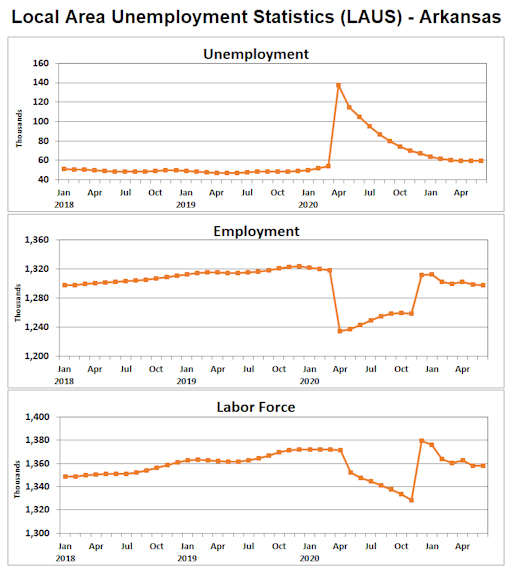 Payroll Employment
Nonfarm payroll employment was essentially unchanged in June as well, with a small net increase of 400 jobs (seasonally adjusted).  Not-seasonally adjusted data showed a slight decline in total employment (-3,700 jobs) but the declines were entirely attributable to the end-of-school-year effects, reflected in lower employment in Educational Services and in State and Local government.  These declines were partly offset by seasonal employment gains in Leisure and Hospitality Services.  After seasonal adjustment to account for these typical recurring patterns, employment in (private) Educational Services was up slightly, while State and Local Government employment was down somewhat.  Hiring in Leisure and Hospitality sectors was up slightly after seasonal adjustment (indicating a larger-than-typical June expansion)

As shown in the table below, Nondurables Manufacturing resumed its recent downward trend in June after showing a sight increase a month earlier.  Employment in Construction and Retail Trade was also down for the month.  Nearly all service-providing sectors showed employment gains, particularly Professional & Business Services. 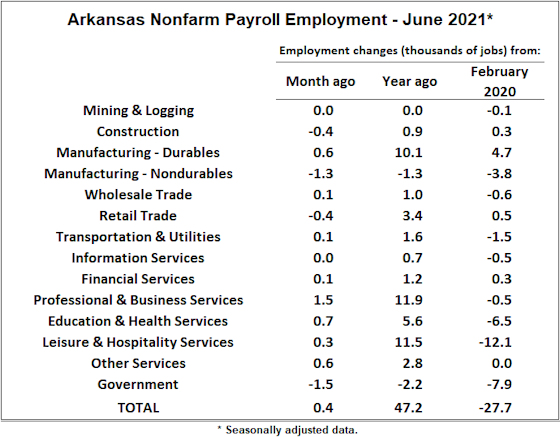 Nearly all sectors have shown substantial growth since June 2020—with the notable exceptions of Nondurables Manufacturing and Government employment.  Compared to pre-pandemic levels, employment remains down by more than 27 thousand.  A handful of sectors have recovered enough to show net gains since February 2020, including Construction, Durables Manufacturing, Retail Trade and Financial Services.

In percentage terms, Arkansas payroll employment was 2.1% lower than in February 2020.  Nationwide, employment remains 4.4% lower than before the pandemic. 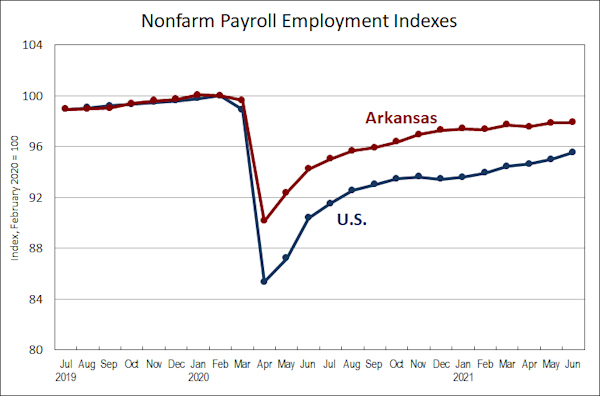