The latest report on state level employment and unemployment showed another strong month for Arkansas.  The unemployment rate remained unchanged at the very low level of 3.4%, and remains 0.9% lower than the national average.  The underlying components of the unemployment rate have also continued to suggest a strong job market:  The number of unemployed was essentially unchanged in July but has declined by over 6,000 since the end of 2016. Meanwhile, the household survey shows an increase in the number of employed Arkansans of over 43,000 in 2017 — with a gain of over 35,000 in just the most recent four months. 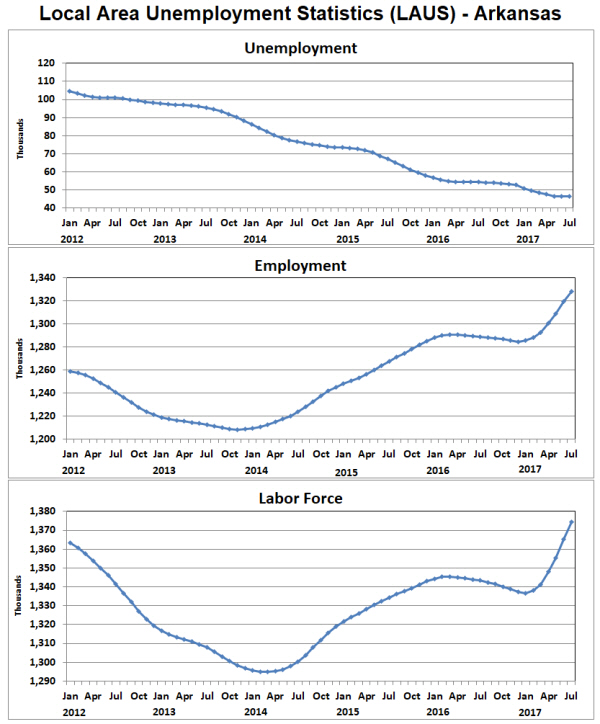 The household employment gains reported over the past four months are extraordinary, and if taken at face value reveal record-breaking employment growth for the state.  Looking over the entire history of the data for Arkansas (1976-present), the four largest monthly changes in household employment have taken place in April, May, June and July of 2017.  The situation is reminiscent of early 2016, when the originally-reported monthly employment gains were equally incredible.  The magnitude of the 2016 increases was significantly reduced when the data were revised earlier this year, and we expect similar revisions to the 2017 data when all is said and done.

What accounts for the rapid growth in employment?  Mathematically, the new employment is reflected in a higher labor force participation rate.  As shown in the chart below, Arkansas suffered a sharp decline in labor force participation during the slowdown of 2012-13, declining from 60.4% to 56.8%. That represents a decline in the number of Arkansans who were either employed or looking for a job amounting to 3-1/2% of the state’s working age population.  The surge in employment thus far in 2017 is matched by an increase in participation, indicating that many of the workers who had left the labor force during the 2012-13 doldrums are either returning to find jobs, or are being replaced by a surge of new entrants.  Either explanation supports the conclusion of favorable conditions for job-seekers. 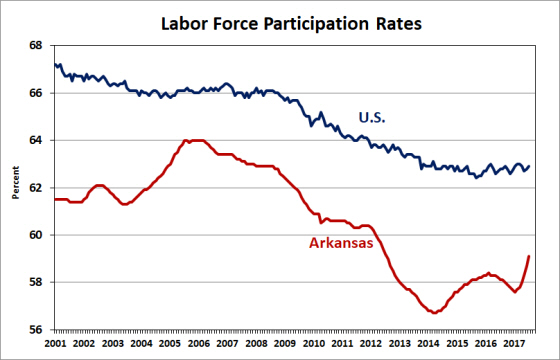 The magnitude of recent increases in labor force participation are just as extraordinary as the rise in household employment.  From January through July, the participation rate has increased from 55.4% to 57.1%.   Once again, it is unlikely that the magnitude of this increase will withstand future data revisions. Nevertheless, there is good reason to believe that the statistics are revealing more than just statistical noise.  The independent payroll survey has been showing strong employment growth during 2017 as well (as described in more detail below).  The two measures of employment are not defined precisely the same way and are collected using different sources and methodologies, so when both are indicating similar patterns of job growth, our confidence in the overall trend in market conditions is enhanced. 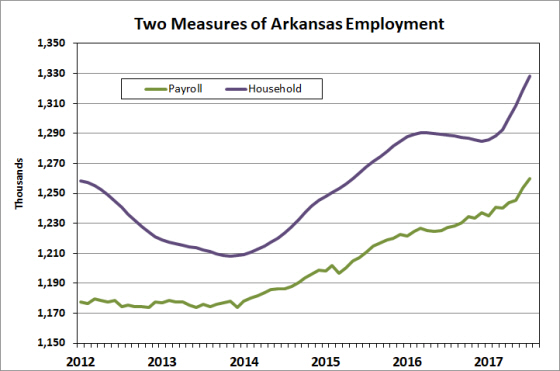 Payroll Employment
From June to July, Nonfarm Payroll Employment increased by 6,100 jobs (seasonally adjusted).  Moreover, the data for June were revised upward by 3,900 jobs, raising the May-June increase from +4,700  to +8,600.  Over the past 12 months, payroll employment is up 32,700, or 2.7%.  The monthly news release from the Bureau of Labor Statistics noted that Arkansas’ year-over-year employment growth rate was among the highest four in the nation (a virtual three-way tie for second place).

Monthly employment gains – as well as year-over-year changes – have been spread across a wide range of sectors.  Service-providing sectors continue to account for the bulk of total job growth.  The three fastest-growing supersectors (Professional and Business, Education & Health, and Leisure & Hospitality) have accounted for nearly two-thirds of the net job creation over the past year.  We’ve also seen growth in goods-producing sectors in recent months: Compared to July 2016, Construction employment is up by 1,600 and Manufacturing is up 3,900. 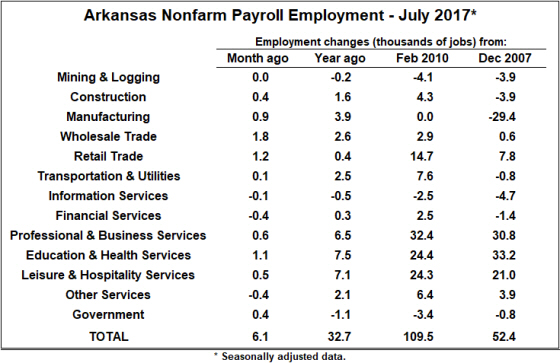 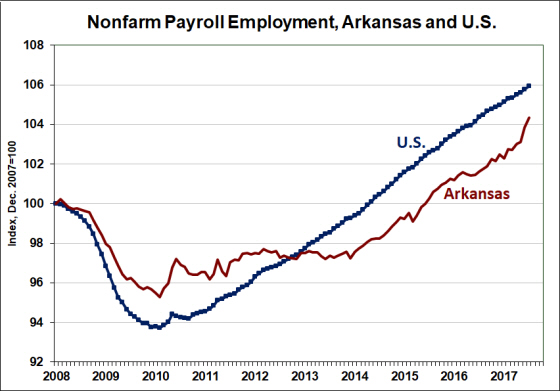