The unemployment rate in Arkansas rose again in July, reaching a new cyclical high of 8.2% (up from 8.1% in June).  The latest data from the Bureau of Labor Statistics (BLS) and the Arkansas Department of Workforce Services (DWS) indicated that the number of Arkansans unemployed rose for the third straight month, up 1,400 in July following a cumulative increase of 3,600 in May and June.  The household survey also showed a decline in the number of those employed, down 7,400.

The employment data from the household survey have been showing a downward trend since March, falling by a total of nearly 25,000.  However, the establishment survey (which is based on reports from employers) shows a slowdown, but with net positive growth since the beginning of the year.  As illustrated in the figure below, employment measured by the payroll survey has been growing–albeit irregularly–since February 2010.  But since March, net growth in payroll employment has been virtually zero (-0.02%). 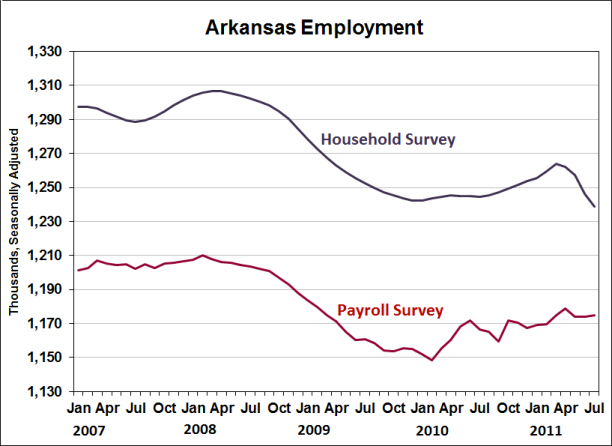 The payroll data for July shows a slight uptick in employment, rising by 600 jobs from the revised level in June (seasonally adjusted).  As shown in the table below, employment declines were registered in some key sectors for the Arkansas economy, including Manufacturing; Trade, Transportation, & Utilities; and Professional & Business Services.  Employment in Leisure & Hospitality Services and Education & Health Services expanded.  In a surprising break from its sluggish recent trend, construction employment rose sharply in July.   Looking at job growth since then end of 2010, only one sector (Manufacturing) has shown negative net growth.  Led by gains in the service providing sectors, total payroll employment has increased by 7,100 jobs during 2011. 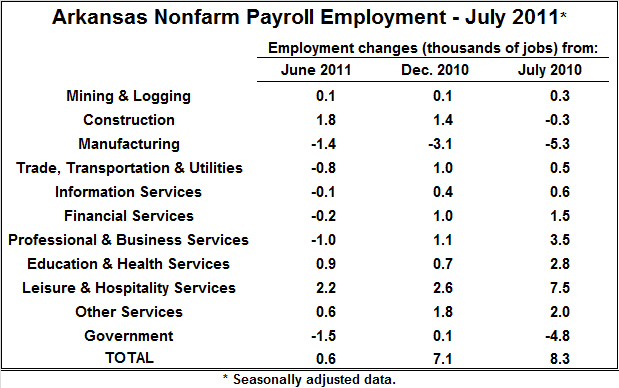