The latest update on state-level employment came out this morning, including the annual benchmark revisions to the payroll employment statistics.

The Bureau of Labor Statistics had recently revised and updated the data derived from the household survey – including unemployment rates (reported here).  Today’s report showed the Arkansas unemployment rate in January 2019 was unchanged from the (revised) 3.7% level of December 2018.  The number of employed was up by 1,334 and the number of unemployed was up by 820, for a total increase in the labor force of 2,154.  The labor force participation rate was unchanged at 57.8%. 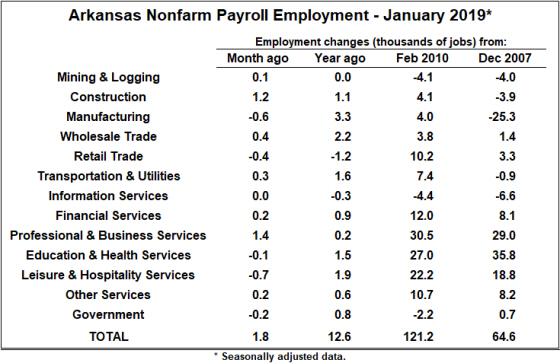 Compared to a year earlier, employment was up 12,600 jobs (approximately 1.0%).  Despite a one-month setback, employment in Manufacturing continues to show strong year-over-year growth (+3,300).  Other sectors that have continued to add jobs over the past 12 months include Education and Health services (+1,500) and Leisure & Hospitality Services (+1,900).   Professional & Business Services had been trending higher in recent months, but today’s data revision scaled back growth in that sector to show little net change over the past year.

Benchmark Revisions
Today’s revisions to Nonfarm Payroll Employment were more substantial than usual.  The benchmark revisions use data from the Quarterly Census of Employment and Wages to provide more accurate job counts.  Typically these revisions affect the data for the most recent 21 months.  The recalculation of seasonal adjustment factors usually results in small changes to the reported data as far back as five years.  This year’s revisions also included updates to the business “birth/death modeling” which provides estimates of employment changes associated with old firms going out of business and new firms starting up.  As a result of these changes, data were revised back–in some cases–all the way back to the start of the time series in 1976. 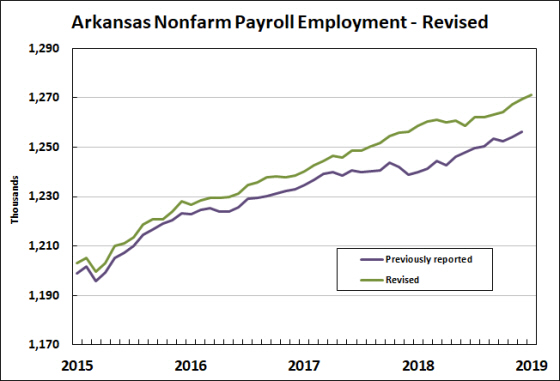 The table below summarizes the impact of the revisions on the level of employment by sector as of December 2018, along with the previously-published and revised growth rates for the period December 2016-December 2018.  Substantial upward revisions to the level of employment affected Transportation and Utilities, Financial Services, and Other Services.  Revisions to recent growth trends were reported for several series.  For example, Other Services were previously reported to have had zero growth over the past two years while the revised data show growth of 11.5%.  On the other hand, Professional and Business Services had been reported at 4.7% growth over the past two years, while the revised growth figure is only 0.4%. 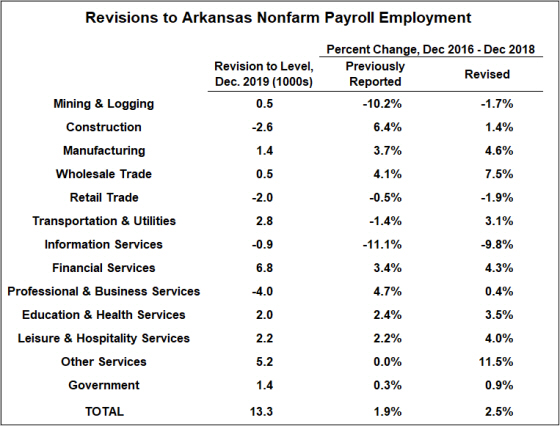 The revised data bring the trend rate of Arkansas employment growth closer to the national average.  For the five-year period from December 2013 through December 2018, previously published data indicated an average annual growth rate of 1.36%.  The new data show a growth rate of 1.54%.  Total nonfarm payroll employment for the U.S. expanded at an annual rate of 1.8% over the same period. 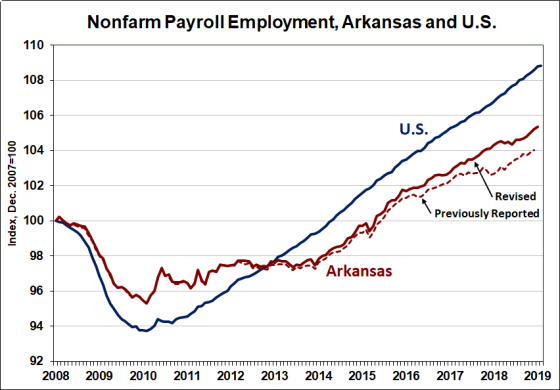