New data on state-level employment and unemployment were released by the Bureau of Labor Statistics this morning.  As we previously reported, revised statistics from the household survey had smoothed some of the ups and downs we saw in the original 2017 data.  In particular, strong growth early in the year and sharp declines later in the year were largely revised away, leaving a modest growth trend followed by a slowdown.  The new figures for January 2018 fit well into that revised picture.  The number of employed Arkansans declined by 1,521 in January — the fourth consecutive monthly decline.  Meanwhile, the number of unemployed was up by 396.  Monthly changes in the number of unemployed have had some ups and downs over the past year, but overall the trend has been for higher unemployment figures:  Since January 2017, the number of unemployed has risen by 1,156. 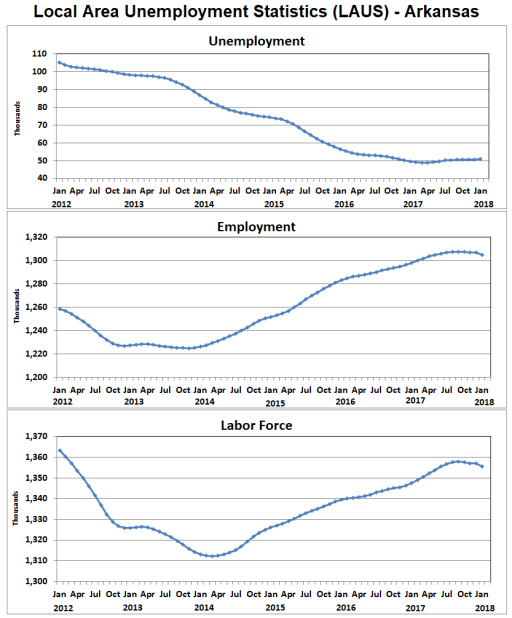 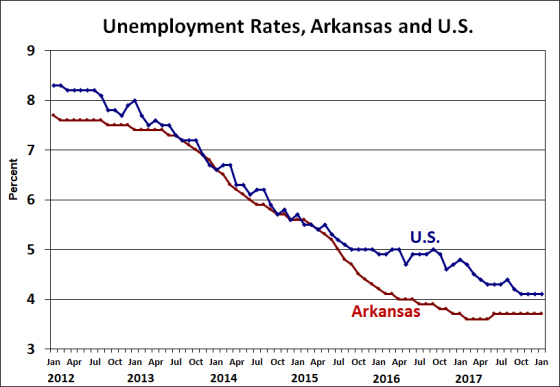 Payroll Employment – REVISIONS
Today’s release included the annual benchmark revisions for state-level nonfarm payroll employment.  As shown in the figure below, the pattern of revisions is similar to what we saw in the household survey:  Much of the strong growth originally reported during the first half of 2017 was revised downward, but some of the weakness reported toward the end of the year was also mitigated by the revisions.  For the period December 2017 through December 2017, job growth was originally reported to be 11,300 jobs (0.9%), while the revised figures show net growth of only 6,100 jobs (0.5%). 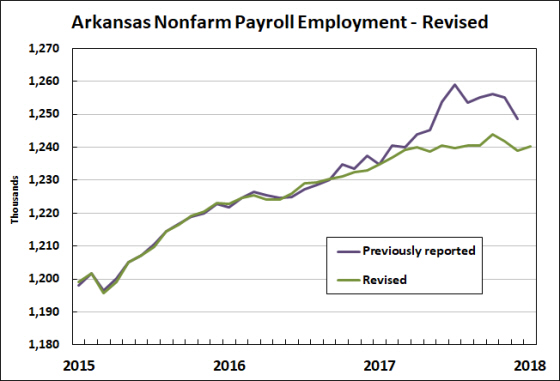 The revisions to the payroll data represent the annual benchmark process, which incorporates more accurate source data from April 2016 forward. Seasonal adjustment factors were revised back to the the beginning of January 2013.  Although the bulk of the revisions affect levels of employment for 2017, the figure for total nonfarm payroll employment illustrates that 2016 employment levels were also affected.  The following table reports the magnitude of revisions by sector — as of December 2017 — along with previously-reported and revised two-year growth rates for the major categories of total payroll employment. 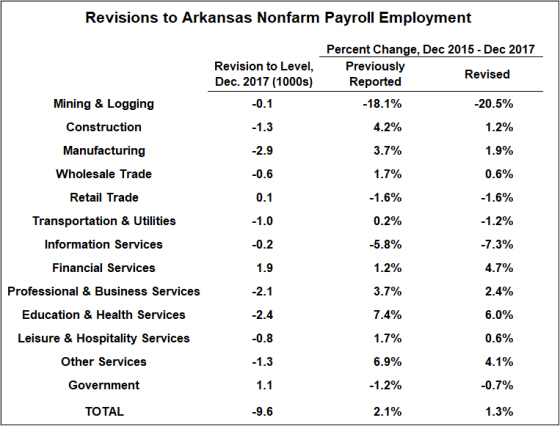 Payroll Employment – January 2018
Arkansas nonfarm payroll employment rose by 1,300 in January and was up 5,600 from a year earlier (revised, seasonally adjusted data).  The not-seasonally adjusted data reported in the news release from the Arkansas Department of Workforce Services showed a decline of 22,000 jobs from December 2017 to January 2018, reflecting the substantial seasonal employment reduction that takes place after the end-of-year holiday season.  After adjustment for this predictable pattern, the seasonally adjusted figures show mixed changes.  Monthly declines tended to be in line with lower trends in some sectors, including Mining & Logging, Construction, Retail Trade, Transportation & Utilities, Information Services, and Leisure & Hospitality Services.  In each of those “supersectors,” employment declined not only over the month of January, but also on net over the previous year.  The strongest growth sectors continue to be Professional & Business Services and Education & Health Services. 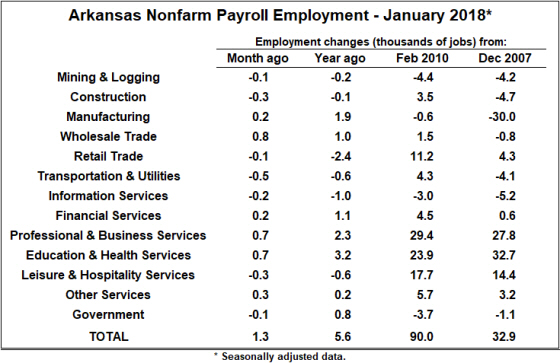