Today’s state employment report featured a new record low unemployment rate for Arkansas, 3.8%.  Previously published figures had shown a 3.8% unemployment rate back in May of 2016, but recent data revisions eliminated that transitory dip in the data.  With the latest downtick, Arkansas’ unemployment rate in January was a full percentage point lower than the national average. 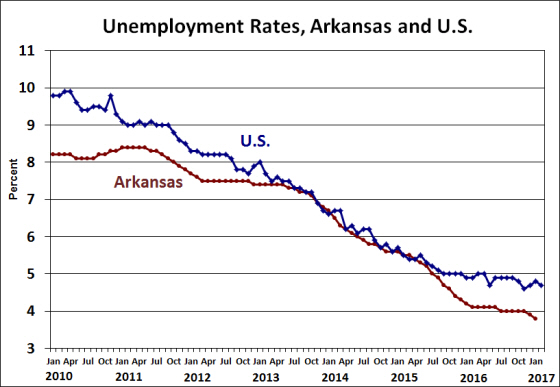 Underlying the unemployment rate itself, the number of unemployed dropped by 2,098 in January, while the number of employed increased by 823.  On net, therefore, the labor force contracted by 1,275 for the month. 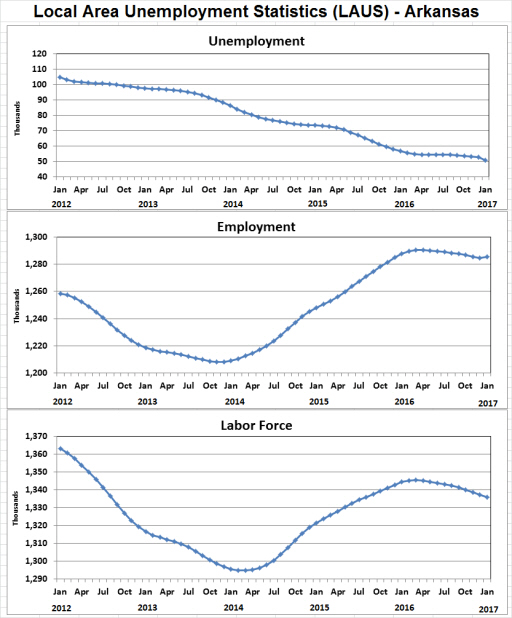 Payroll Data
Nonfarm payroll employment declined by 4,300 in January.  In a reversal of typical patterns, goods-producing sectors added jobs in January, while service-providing sectors shed jobs during the month.  Construction and Manufacturing showed increases of 300 and 700 workers, respectively.  Meanwhile, employment in service-providing sectors was down by 5,300.  The declines were broadly based, with sectors losing jobs including Wholesale Trade, Transportation and Utilities, Information Services, Professional and Business Services, and Leisure and Hospitality. 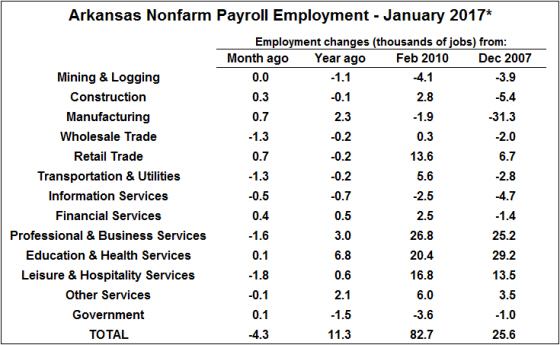 Compared to a year ago, total employment is up by 11,300.  After data revisions (see below), growth in Manufacturing employment is looking more healthy, up by 2,300 over the past 12 months.  The bulk of job growth is taking place in key service sectors, Education and Health Services up 6,800, Professional and business services up 300, and Other Services up 2,100.

Revisions to Payroll Data
Today’s report included the annual benchmark revisions to the payroll data.  Data from the Quarterly Census of Employment and Wages (QCEW), which is more complete and accurate than the monthly payroll employment statistics, had led us to expect a modest downward revision to total employment levels for the state.  However, the revised data revealed a small upward adjustment, amounting to about 800 jobs.  After revision, total payroll employment shows a growth rate of 1.2% from December 2015 through December 2016 (up from an original estimate of 0.4%).  Growth for the previous year was revised downward slightly from 2.3% to 2.0%. 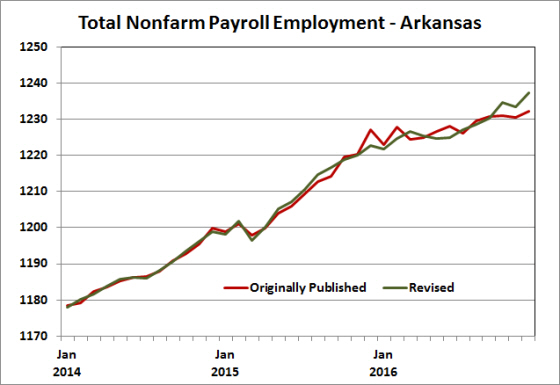 Revisions to the not-seasonally adjusted data covered the period March 2015 through December 2016.  Although there are small changes in the data for previous periods, these are only minor adjustments to seasonal factors.  Hence, the economically significant revisions are limited to the last two years.  The table below summarizes the impact of the revisions by sector, reporting on the change in the level of employment by sector as of December 2016, and comparing the pre-revision to post-revision growth rates for the two-year period December 2014 to December 2016. 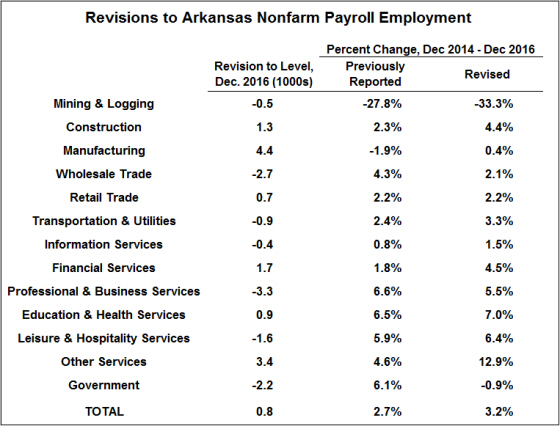