The December report on state employment and unemployment showed continuing improvement in Arkansas labor markets.  For the fourth month in a row, the number of unemployed declined and the number of employed increased sharply.  In fact, the household survey shows a three month employment gain of over 29,000 — an unprecedented rate of increase.  As a result, the state’s total labor force has expanded by over 24,000 in the past three months, and the unemployment rate has declined by one-half percentage point to 5.7%. 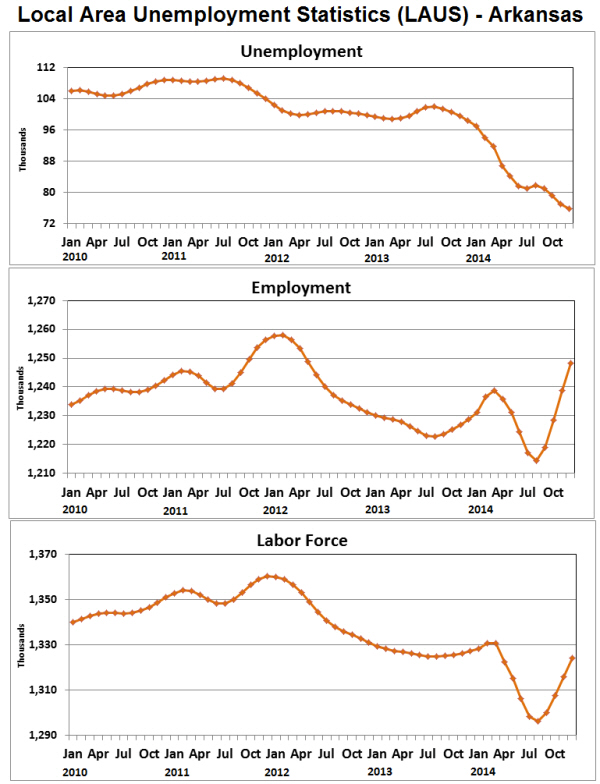 The volatility of statistics from the household survey has been particularly large in recent months.  When the annual averages are published on March 4, the labor force and unemployment data will be revised using a new generation of time-series models.  The updated statistics will also will also incorporate updated estimation inputs and population controls from the Census Bureau.  It will be interesting to see how these revisions affect the unusual patterns of the past year or so.  In the meantime, the existing data are clearly indicating improving conditions over the second half of 2014.

Payroll Survey
The improvement seen in the statistics from the household survey are reinforced by recent observations of employment growth from the payroll survey.  The report for November shows an increase of 4,300 jobs for the month (seasonally adjusted), with a 12-month cumulative increase of 22,600.  Assuming that these figures are sustained after the upcoming benchmark revisions (see below), December’s report marked a milestone:  Since the employment trough of February 2010 the Arkansas economy has now added more than 57,000 jobs, bringing total employment to a point slightly higher than it was before the recession officially hit the economy. 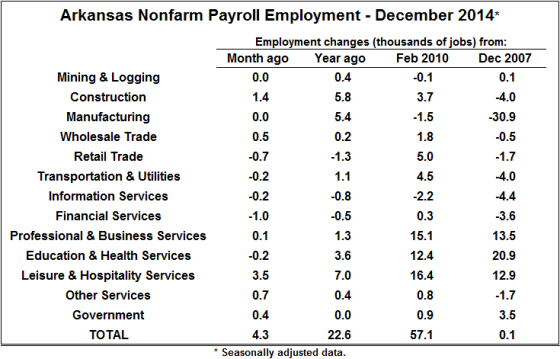 The December employment increase was largely attributable to a gain in Leisure & Hospitality Services.  The not-seasonally adjusted data featured by the Arkansas Department of Workforce Services showed a slight decline in this category,  but the decline was far less than would be expected in a typical December — hence, the gain in seasonally-adjusted employment.  Similar seasonal factors affected Education and Health, and State & Local Government (in both cases, due to winter break at schools).

Over the past twelve months, payroll employment has increased 22,600, with notable gains in two sectors that have been slow to recover from the great recession:  Construction and Manufacturing.  Gains in Education & Health Services and Leisure & Hospitality Services also contributed to the overall year-over-year increase.

Upcoming Benchmark Revisions
When the next payroll data release comes out on March 17, the payroll data will be revised to incorporate new 2014 benchmarks.  We had previously estimated that the revised data will show significantly weaker job growth over the past two years — with downward revisions expected to be in the range of 9 to 10 thousand jobs.  Good news has arrived since those forecasts:  The Quarterly Census of Employment and Wages  statistics for the second quarter of 2014 indicates a sharp upward revision to the current data are in order.  As a result, while we are still anticipating downward revisions to the data for the second half of 2013, more recent data now appear to be more closely aligned with currently published data.  Hence, as shown in the figure below, the revised statistics will show that sluggish job growth prevailed through much of 2011 through 2013, but that growth accelerated sharply in 2014.  It is still possible that the revisions will incorporate QCEW data from the third quarter as well, but those data are not yet available to the public and so are not incorporated in our current expectations. 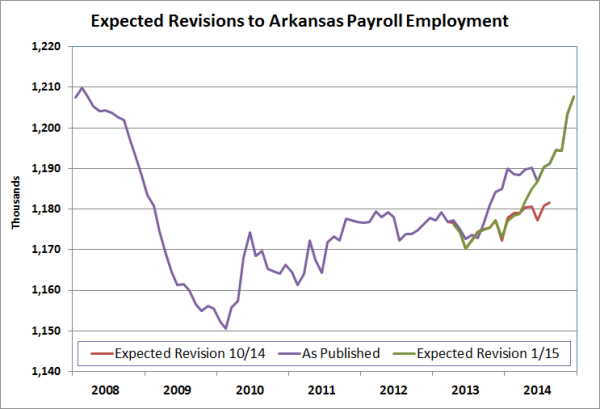 After revision, our best estimate is that total payroll employment for the latter half of 2014 will be unaffected.  Nevertheless, some of the components of payroll employment are likely to show revised growth patterns.  The set of figures below illustrates the nature (and variety) of some of the expected revisions, using quarterly averaged data. 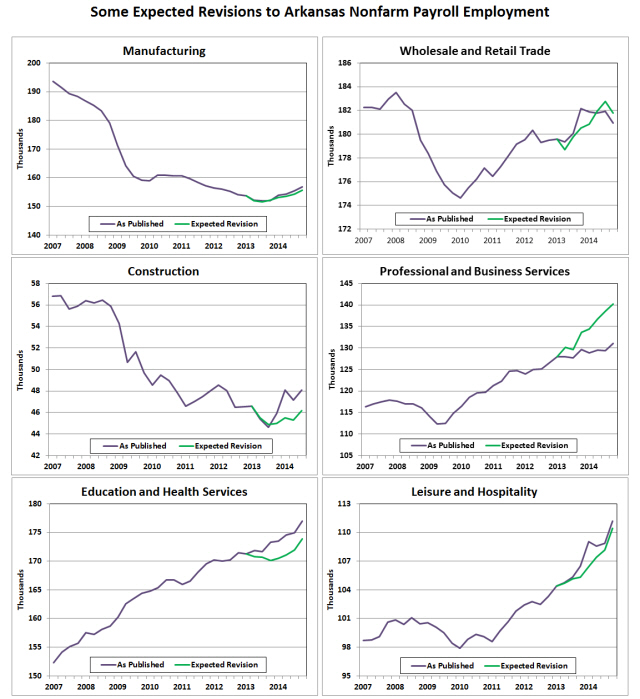 These expected revisions are, at this point, only estimates.  Especially when it comes to the disaggregated sector-by-sector data, the new figures may differ from these projections.  And although some sectors are likely to experience some downward revisions in the level of employment, the trend over time is positive for the most part — with or without the revisions.