The August report on employment and unemployment was a bit disappointing in several respects, but the latest month-to-month readings should be considered against a backdrop of positive longer-term trends.  The headline news was an uptick in Arkansas’ unemployment rate, up from 3.4% to 3.5%. The rise was attributable to an increase in the number of unemployed by over 1,200 — the first notable increase in that figure since early 2011.  But with unemployment at historic lows, it is not surprising to see some ups and downs in the monthly data.  The number of employed and the total labor force both increased again in August, albeit at a slower pace than in the previous four months. 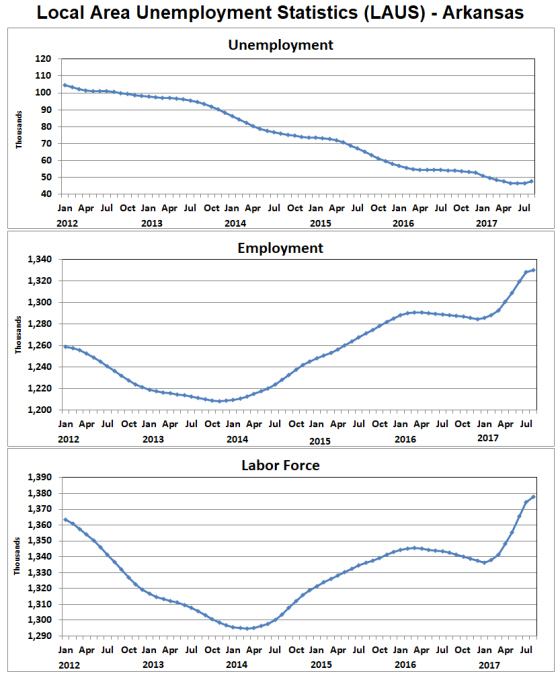 Compared to August 2016, the unemployment rate was down 0.5% with the number employed up 41,710 and the number of employed down 6,501.  The magnitude of the year-over-year employment gains is likely to be reduced when the data are revised early next year, but the direction of the trend remains clearly positive.

Payroll Employment
The report on nonfarm payroll employment showed a decline of 7,200 jobs in August (seasonally adjusted).  Employment in goods-producing sectors declined slightly from July to August, with construction down by 1,500 and Manufacturing off by 300.  Service-providing industries also shed jobs in August, with declines totaling 5,400 jobs.  Losses were registered in some of the sectors that have been showing the largest gains in recent months, including a downturn in Professional & Business Services (-1,100) and Leisure & Hospitality Services (-600).  Even Health Care and Social Assistance showed a decline of 900 jobs. 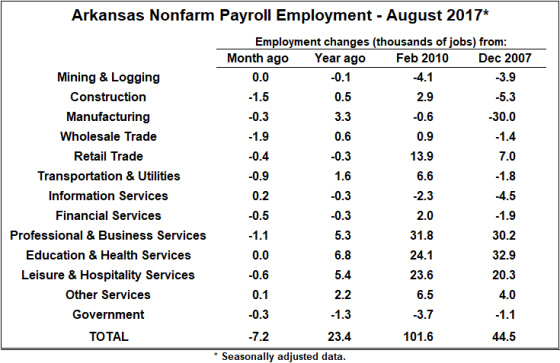 Despite these one-month losses, the trends in payroll employment remain strong.  From August 2016 to August 2017, the net employment increase was 23,400, or 1.9%. The year-over-year increases are attributable to both goods-producing and service-providing sectors, but with the largest gains in the service sectors.  Over the same period, nonfarm payroll employment nationwide increased by 1.5%. 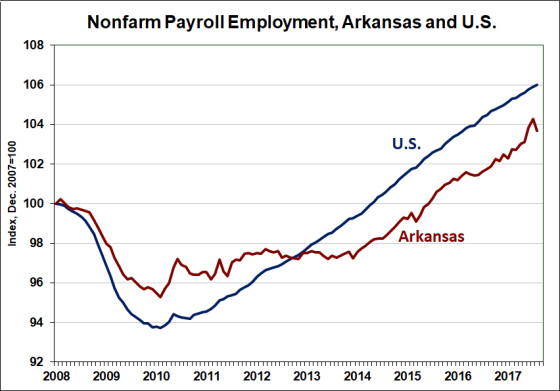