Another disappointing employment report for Arkansas:  The latest data from the U.S. Bureau of Labor Statistics and the Arkansas Department of Workforce Services show that unemployment was up again in August, but not enough to raise the unemployment rate from the 7.4% level of July.  Over the first 8 months of 2013, the unemployment rate has crept up by 0.3%, while the number of unemployed has increased by 2,710.  The number of employed from the household survey declined by 5,322 in August, contributing to a net loss of 27,490 since December of 2012. 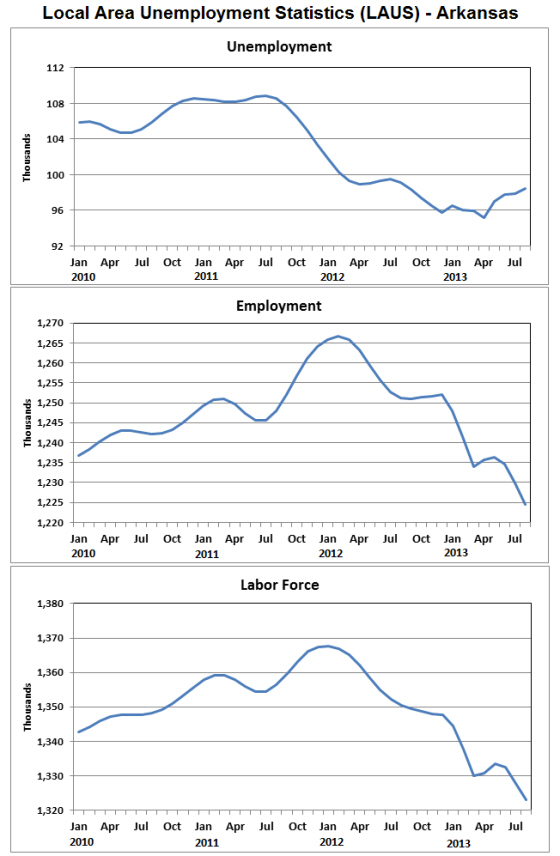 Payroll Survey:
The report on nonfarm payroll employment for Arkansas was no more encouraging.  The net change in employment from July to August was -1,200 (seasonally adjusted).  Employment was lower in most sectors, including a declines of 600 in Construction and 800 in Wholesale Trade.  Two sectors did show month-over-month increases:  Financial Activities (+700) and Manufacturing (+900).  Over the past 12 months, we’ve seen healthy gains in Retail Trade, Education & Health Services, and Transportation & Utilities, but several sectors have seen declines.  Notably, the goods-producing sectors have continued to show net declines.  Compared to August 2012, payroll employment has increase by just 12,200 — approximately 1.0%. 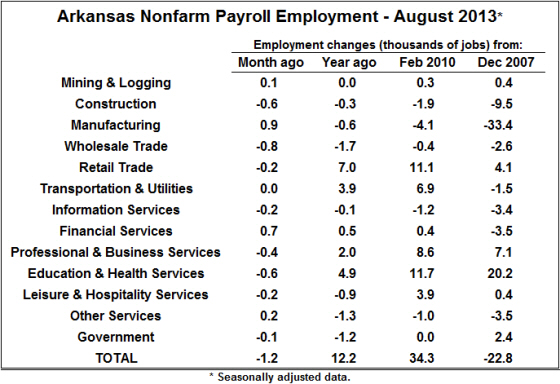 The household data and payroll data continue to provide conflicting signals:  As shown in the figure below, payroll employment has continued to trend upward (albeit slowly and irregularly), while the household employment measure has been falling since the beginning of 2012.  It seems likely that the annual benchmark revisions to the payroll data will ultimately be negative, bringing the two employment measures into closer alignment.  With the release of the Quarterly Census of Employment and Wages next week, we are likely to see some evidence supporting this conjecture. 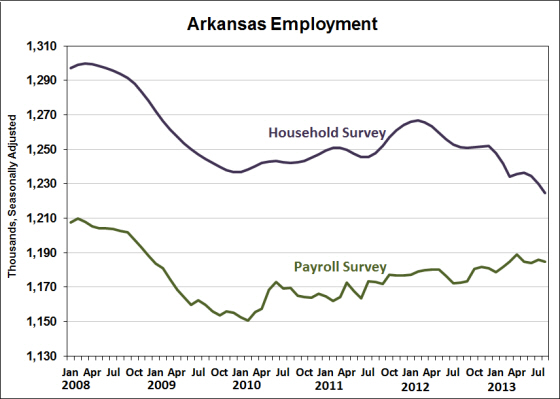