The Bureau of Labor Statistics has released revised state unemployment data for 2018, along with annual estimates for household employment and unemployment.  The annual average unemployment rate for Arkansas was 3.7% in 2018, unchanged from the previous year. 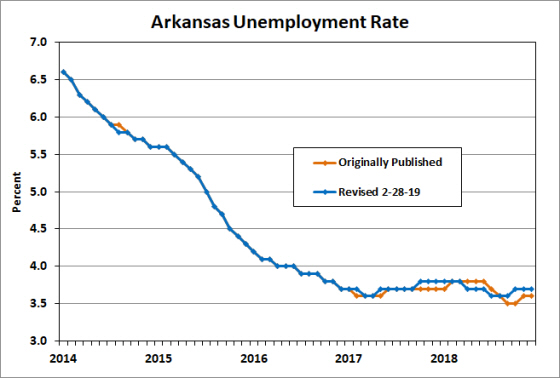 Revisions to the underlying data on the number of employed and unemployed had the effect of smoothing out some of the ups-and-downs in recently reported data.  The number of unemployed Arkansans was originally reported to have edged higher in early 2018, fallen over the summer months, then increased once again toward the end of the year.  The newly revised data shows a more gradual and steady decline.  Similarly, the number of employed is now estimated to have grown more slowly during 2016 and 2017 than originally reported, but the gradual decline reported during 2018 is no longer a feature of the data either.  Changes in the data on the total labor force primarily reflect the revisions to the employment estimates.

The annual revision of Local Area Unemployment Statistics serves as a reminder that we should never put too much emphasis on short-term fluctuations in the data.  For example, from October 2017 through June 2018, the originally published data indicated nine consecutive declines in employment.  After the data revision, the only monthly decline during that entire period was a small down-tick in May 2018.  Monthly employment changes in August and September of 2018 were originally reported as declines, but now register as relatively large increases. 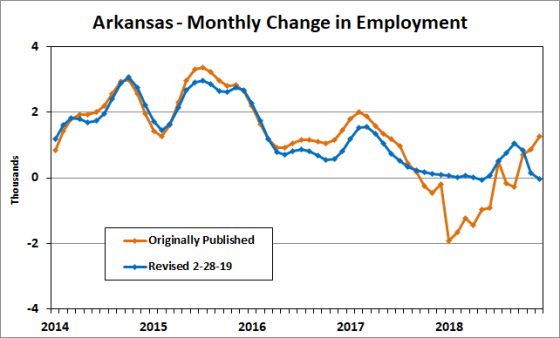 Overall, the revised picture of household employment and unemployment in Arkansas indicates a labor market with an unemployment rate that remains low and relatively stable, with employment growth slowing over time as the capacity for employment expansion is constrained by labor force growth.