New data from the Federal Housing Finance Agency (FHFA) show that house prices in Arkansas increased slightly in the third quarter,  and data for the second quarter were revised to show a modest increase as well.   The FHFA All-Transaction Index for Arkansas increased by 0.4% from the second quarter to the third, leaving home prices down 1.8% from a year earlier.  The index for the U.S. was up 0.9% for the quarter, but remains 4.3% lower than the previous year.

House prices in Arkansas have generally been trending downward from the beginning of 2009, and the increase in prices in the third quarter only partly reversed the accumulated declines.  Compared to two years ago, house prices are down in all of Arkansas’ MSAs.  But in the longer run, house prices outside of Northwest Arkansas have retained much of their value.  Over the past 5 years, the net change in house prices has been positive in 5 of the state’s MSAs, and are essentially unchanged in Pine Bluff.  Only the Fayetteville and Memphis metro areas have shown net declines since the third quarter of 2006. 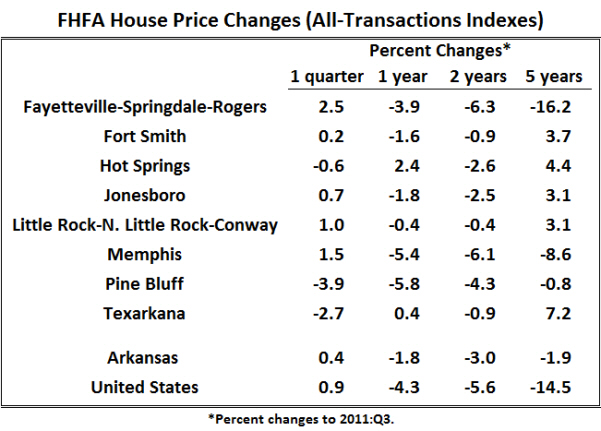