This morning, the Bureau of Economic Analysis (BEA) released statistics on 2010 personal income for the nation’s metropolitan areas.    The BEA reported that “Personal income rose in 2010 in all but four of the nation’s 366 metropolitan statistical areas (MSAs).”  This represents a vast improvement over 2009, when revised figures show that personal income increased in only 131 of the 366 metro areas.  As shown in the map below, many of the fastest-growing MSAs were scattered across the southern U.S.  The top quintile includes the Arkansas MSAs of Fayetteville-Rogers-Springdale and Jonesboro.  Three other MSAs–Fort Smith, Pine Bluff, and Texarkana were in the next highest quintile. 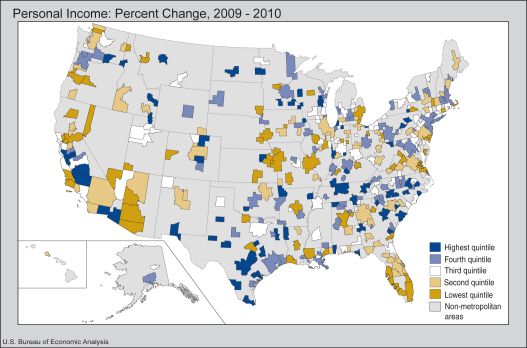 As shown in the table below, personal income growth exceeded the national average for metro areas in all but two of Arkansas’ MSAs.  In Hot Springs, a growth rate of 2.8% nearly matched the national growth rate of 2.9%, while growth in the Little Rock-N. Little Rock-Conway MSA was only 1.4%.  The national rankings diplay in interesting pattern: the slower-growing MSAs in Arkansas for 2010 were among the best performers in the recession year of 2009.  When taken as a two year average, growth rates for all of Arkansas’ MSAs — except Memphis — were at or above the median for the U.S. 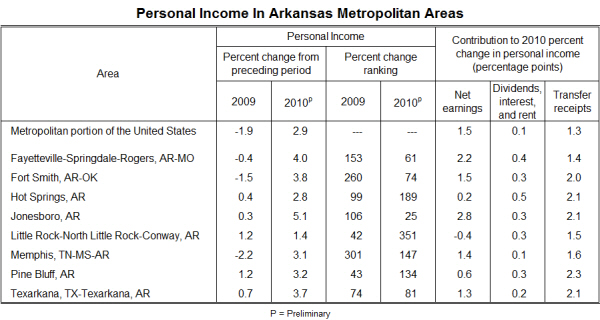 The breakdown of personal income sources shown in the table indicates that net earnings growth was positive in all MSAs except for Little Rock.  (Net earnings includes wage and salary disbursements, supplements to wages and salaries, and proprietors’ income.)  Transfer receipts provided substantial support for personal income in all of Arkansas metro areas, especially the smaller MSAs.